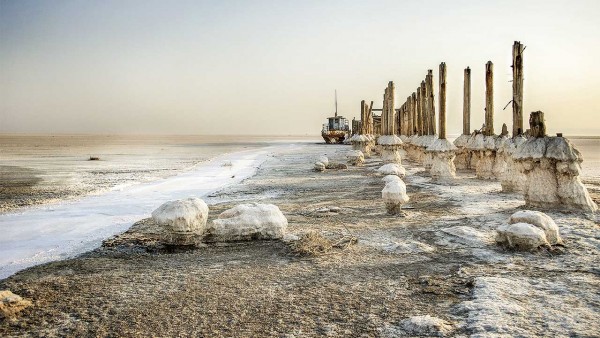 Lake Urmia, in Iran's northwestern corner, was once the planet's sixth largest salt lake, covering about 5200 square kilometers—a bit larger than the Great Salt Lake in Utah. Flamingos, egrets, and other waterfowl feasted on brine shrimp, and resorts catered to tourists who believed that bathing in the saline waters improves health. But after gradually receding for years, the water body shriveled last year to a mere 10% of its maximum. Like the Aral Sea, a better-known vanishing salt lake in Central Asia, Lake Urmia is exposing a salt desert that generates noxious dust, threatening crops and people. Wildlife is vanishing, all the way down to its endemic shrimp, and recreation is also on the extinction list. Iran plans to spend around $6 billion over the next decade on Urmia's revival—the largest environmental project in the country.

Asthma cells scramble like ‘there’s a fire drill’
Monday, 16 May 2016
In people with asthma, the cells that line the airways in the lungs are unusually... Read More...

Fragile ecosystems under pressure
Friday, 04 September 2015
The rescue plan for Lake Urmia, a vast but dwindling salt lake, is Iran’s most... Read More...